On each day of 2015, I tweeted a micro-review of the typefaces in the Typodarium, a tear-off cal— no, wait, I think I said that before. This now is the fun part. Using CLAN (a piece of software by psychologist Brian MacWhinney et al.), I did some basic lexical frequency analysis on the 365 tweets I wrote – or rather I checked which content words I used most frequently and created a word cloud from these. Don’t worry, I am not confusing a word cloud with a full-fledged lexical analysis of a proper corpus (as others may do). The tweet corpus is small anyway (just over 5,000 words) and a fine example of the observer’s paradox. The idea to analyse the tweets did not occur to me on 1 January just after midnight, but sometime last autumn, so I wrote about a third of the tweets knowing that I would analyse them later on.

The word cloud was made using Wordle. You can ask it to filter out highly frequent (function) words. If you did not, the most frequent words in the corpus – the, a, is, this etc. – would dominate the picture. ‘The’ alone was used 189 times, that is, more than three times as frequently as the most frequent word that was not filtered (‘typeface’). Due to the filtering, one word is missing from the picture: ‘but’. If you look at one of the many lists of most common English words, you will find ‘but’ in the top 50, but not really high on the list (22nd, 33rd, 36th – you get the idea). In my corpus, by contrast, ‘but’ appeared 105 times, that is, in almost a third of the tweets. It is the fifth most frequent word. Just so you know.

As you may have guessed, the size of the words in the cloud reflects their frequency. The colours, on the other hand, don’t mean a thing. And if you wondered, the typeface I used is League Gothic from The League of Moveable Type, which was released under the SIL Open Font License. 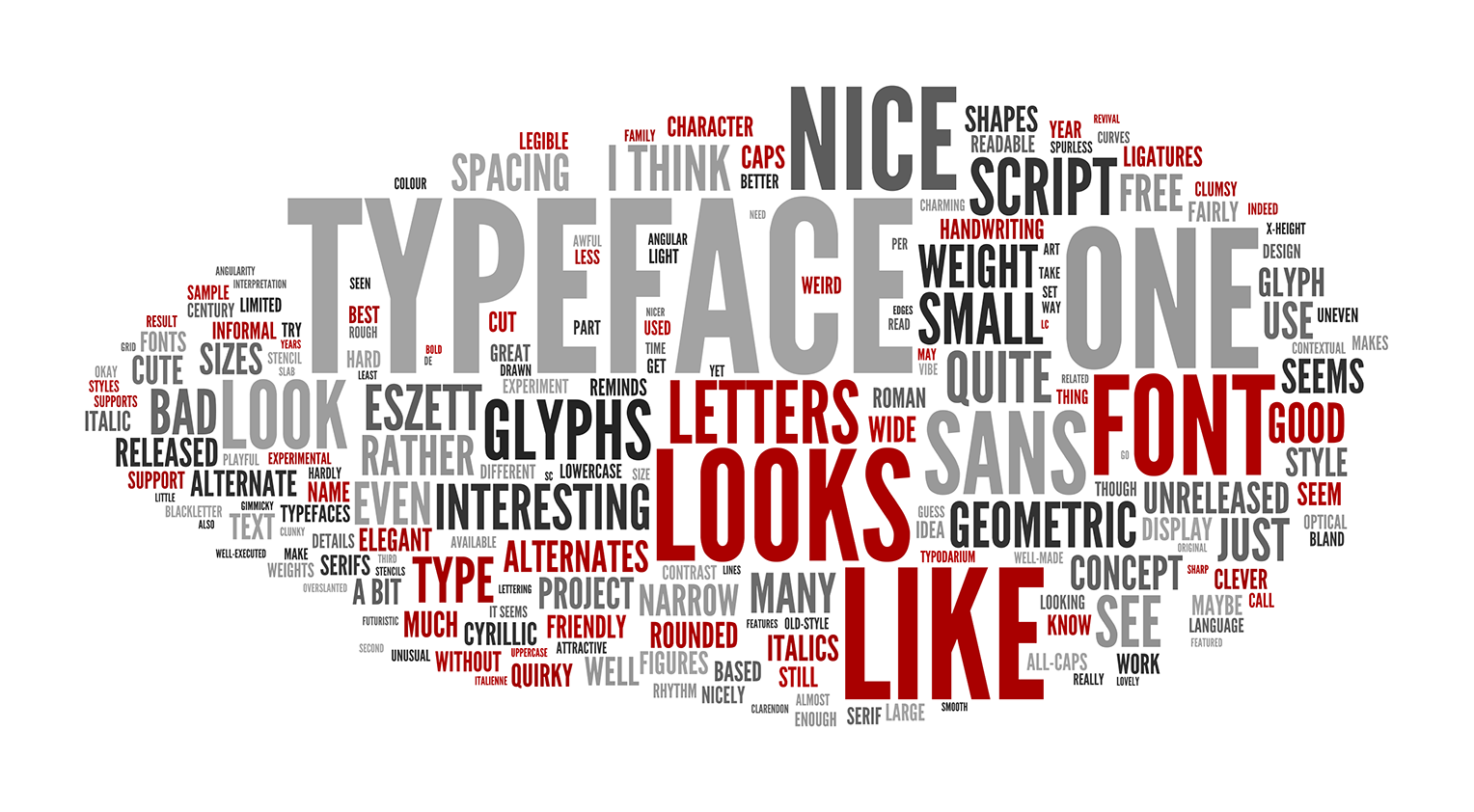 Here is what I think you can learn from this cloud:

END_OF_DOCUMENT_TOKEN_TO_BE_REPLACED

On 28 December 2015, Dutch type designer and typographer Bram de Does (* 1934) passed away. Jan Middendorp (@DutchTypeJam) honoured him by posting a picture in which we see text handwritten by De Does. The text is a reply to a comment that Peter Matthias Noordzij made on the letter ‘k’ of a custom headline version of De Does’ Lexicon typeface. The reply is in Dutch, so I tried to translate it to English:

In the third, fourth and fifth sentence, De Does uses object-initial constructions in Dutch, which are difficult to render in English. A construction that uses left dislocation probably comes closest in English: ‘The junction, I don’t want to lower it’ – but that does not sound particularly natural to me.

On each day of 2015, I tweeted a micro-review of the typefaces in the Typodarium, a tear-off calendar (published by Hermann Schmidt, Mainz – a city with some typographic heritage, as you may know). If you would like to (re)read these 365 tweets, have a look here. In this review, I will focus on the editorial concept of the calendar, rather than on the individual typefaces. But isn’t it pointless to review a calendar for a year that just ended? Maybe it isn’t. There have been rumours that the 2016 Typodarium may be the final one (but the editors of the Typodarium have made a post to their Facebook page saying: “see you next year for the issue #9”). Whether or not this specific product is (almost) dead, the general idea of a daily type calendar should not die. A physical calendar for your physical desktop still seems like an enjoyable way of getting to know new and interesting typefaces. In this review, I will try to point out some aspects that may have rendered the 2015 Typodarium – however much I enjoyed tweeting about its typefaces – less worthwhile than it could have been. If you ever consider publishing a daily type calendar, take a good look at each edition of the Typodarium, read this review – and make it better.

The first Typodarium edition was published in 2008 (for 2009). All editions were edited by Lars Harmsen and Raban Ruddigkeit. In recent years, a jury helped selecting the typefaces. The jury for the 2015 edition were Philippe Apeloig, Alexander Branczyk, Martina Flor, Ivo Gabrowitsch and Mario Lombardo. Three of the five jury members have published retail typefaces themselves (Ivo Gabrowitsch has not, as far as I know, and Mario Lombardo has designed exclusive custom typefaces). It is sad to see only one female type designer among four men, but not surprising, given a lack of gender diversity in professional type design. In spite of that, this is a competent jury, so I was surprised to find that two of the calendar’s main weaknesses were caused by what I think is an unduly lenient editorial policy.