A few days ago, Font­store launched – a new player in the market for subscription-based font services. To be accurate, Font­store is both a foundry and a font service provider: You can buy fonts there like at any other foundry, but you can also become a subscriber. For $ 15 per month (or $ 150 per year), you get access to their entire library of desktop fonts. Having used Typekit for a few years and having reviewed the Monotype Library Subscription (MLS) last year, I was curious to see what Font­store has to offer. The very first impression was not too favourable: Their website is slow and cluttered up with animations and effects, making it difficult to get an overview of their collection (others loved their site or also hated it). Font­store does not excel at transparency either: The name of its founder, Satya Rajpurohit, is nowhere to be found on the website (though he has promised to remedy this). In order to access the Font­store Library (the contents of which will be discussed below) through the subscription service, I subscribed and payed by credit card; both went without problems. Installing the app syncing the fonts on Windows was not exactly a seamless experience, though: I got a number of warnings that are typically not shown upon installing software, but just going ahead did not crash the system. Once installed, you go to the website, select the fonts you want to use, and they are available just seconds later.

As I noted in my review of the MLS, low-priced font subscription services do not only raise technical questions, but ethical ones as well. Creating fonts is a time-consuming task requiring specialised skills that are gained through extensive training and practice. Few type designers create fonts just for the fun of it. Most do so to make (part of) a living – but you need a lot of subscribers before you are able to provide decent payment to all type designers. As a customer, you have to decide: Is subscribing to such a service tantamount to supporting exploitative working conditions and fuelling the downward price spiral in the font market? In the case of Font­store, the decision may be a little easier: All typefaces were commissioned for that service with (I presume) designers knowing what they signed for. In a post on TypeDrawers, Satya Rajpurohit, the founder of Font­store, explained that Font­store offers different payment models to type designers, neither of them based on royalties. In any case, the business risk mainly rests with Font­store, rather than with individual designers. That seems friendlier than royalty-based models, but $ 15 per month is still not much to go round, so time will tell if the system is sustainable. Also, even the best offer in a given situation can be a bad one: Font­store carries fonts from quite a few young type designers, some of them releasing their first retail fonts. Many senior designers may have been reluctant to accept Font­store’s payment models and have their fonts offered at a bargain price.

The library from a bird’s-eye view

Let’s have a broad look at the collection, offering 75 typefaces that 31 type designers have contributed to. Some of the most prolific contributors have links with France: Jérémie Hornus and Alisa Nowak have worked on 10 typefaces each (and collaborated on most of them). Both were part of FontYou and work together at Black[Foundry], which was co-founded by Hornus (with Grégori Vincens). Like several other contributors, Hornus and Nowak have designed typefaces released by the Indian Type Foundry (ITF), headed by Font­store founder Satya Rajpurohit. Gaëtan Baehr, Théo Guillard and Jean-Baptiste Morizot (5 typefaces each in the Font­store collection) have worked for ITF and work for Black[Foundry]. Frode Helland (co-founder of Norwegian Monokrom) has also contributed 5 typefaces, but, to my knowledge, has not released at any of the aforementioned foundries. Aarya Purohit (working at ITF), Diana Ovezea (who has released a typeface family at ITF) and Deni Anggara have contributed to 4 typefaces each. Again, Font­store could do better in terms of transparency: 7 typefaces are credited to ITF with no individual designers mentioned. Based on their own (less than ideal) classification, we can say that Font­store offers 34 sans-serif typefaces, 21 serif typefaces (5 of which are classified as slab serifs) and 20 display typefaces (5 of which are classified as script typefaces). Based on my own assessment, I would say that typefaces that can be used for body text in the broadest sense of the term make up about 40 % of the library. Of these typefaces, about two thirds are sans-serif. An exhaustive overview of the initial collection can be downloaded here. Some of my personal favourites are shown below. 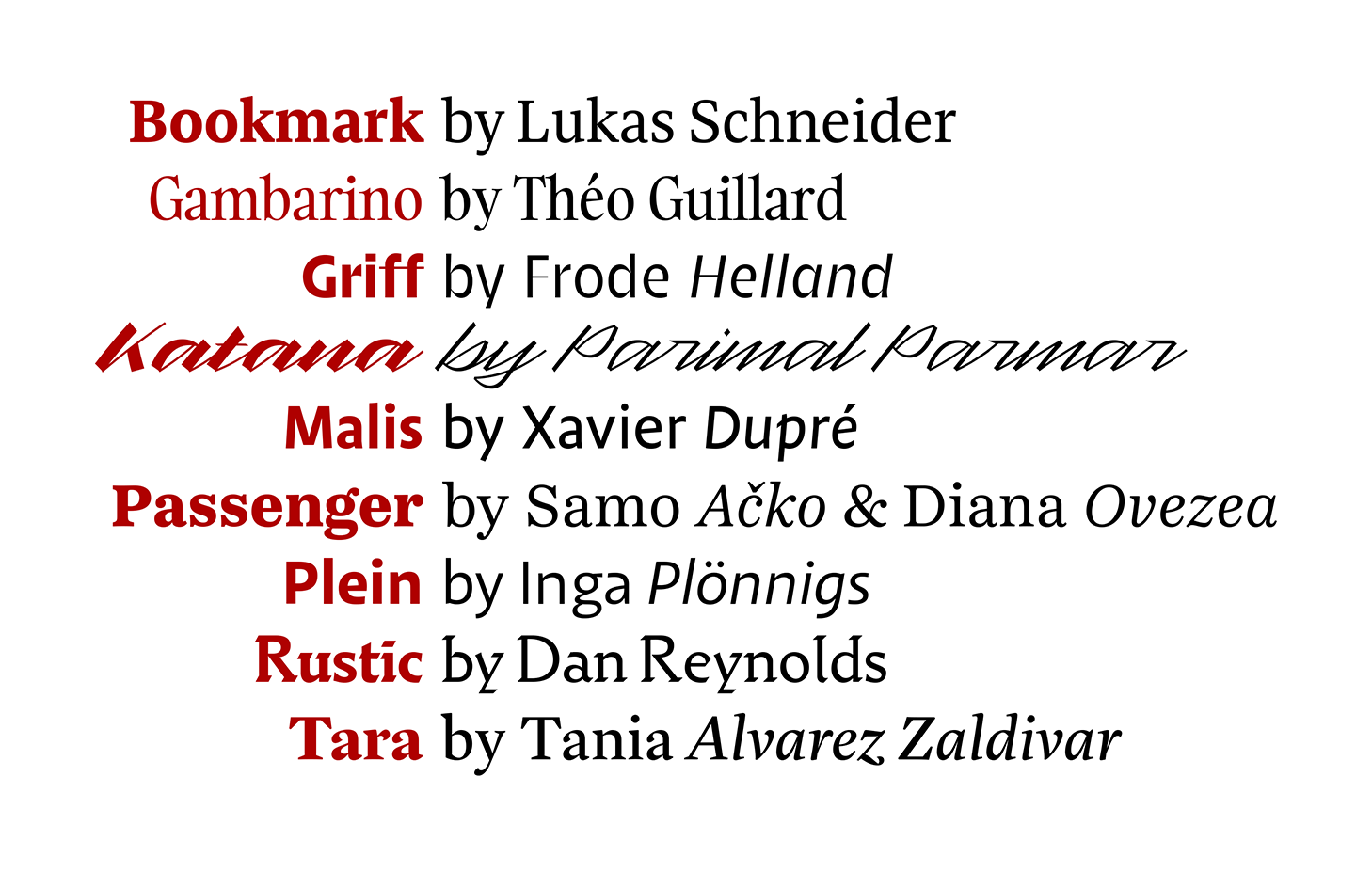 The library in more detail

On the one hand, Font­store’s library is tiny (200 fonts, belonging to 75 typefaces) – compared to Monotype’s MLS (more than 9,000 fonts, belonging to ± 2,200 typefaces) or Adobe’s Typekit (± 900 typefaces for desktop sync). On the other hand, I know of no other foundry that has released 75 digital typefaces on the same day. If it is not a unique accomplishment, it certainly is exceptional. Comparing the three libraries, one more important difference is the size of the ‘back catalogue’ (i.e., typefaces that were created long before the subscription service launched): To be honest, the MLS is nothing but one large back catalogue for the better part. Typekit has a higher share of new releases, but also includes some classics from Adobe’s library. On Font­store, everything is new. Being able to draw on a sizeable back catalogue, as Monotype and Adobe can, has advantages: It provides a strong foundation of usable basics, so one can – or, well, could – focus on adding innovative type to the collection.

Looking at Font­store’s collection, I get the impression that they have struggled with the absence of such a back catalogue: They know that most customers will subscribe to no more than one font service. In whatever service they use, customers will expect to find more or less everything they need. For Font­store, this means that they, too, have to offer typefaces in certain popular categories – say, a type system with sans, serif and monospaced variants, a spurless sans, a neurial neutral grotesque, a Didone, some all-caps stuff or some script typefaces. In complying with these wishes, Font­store’s designers are forced to reinvent the wheel, even if the only fault in existing wheels is that they are not part of the Font­store library. In most cases, this yields technically solid typefaces that are nothing to write home about. But in some cases, the result seems too close for comfort to earlier designs: Demo, for instance, is so heavily reminiscent of Sansa that it suggests a serious lack of fresh ideas, to say the least.¹ Similarly, the (bold) italics of Gambetta elicit a too strong sense of Minion déjà vu. In any case, a bunch of type designers were asked to work on things that have already been worked on elsewhere for, as far as I can see, the sole purpose of creating a ‘complete’ library that checks all the boxes. That may be inevitable from a business perspective, but it feels like a waste of resources to me.

On the upside, Font­store is an investment in another bunch of type designers working on nice things. As my selection of favourites above may suggest, I am most interested in text typefaces or toned-down display typefaces. There can never be enough of either, but the selection at Font­store is nothing to sneeze at. It is hard to say if the nine typefaces shown above would not have been released if Font­store had not come into existence. I think most would have found their place in the font market, but we may have had to wait a little longer to get to use them. These – and some other original or even innovative typefaces that I have not singled out for various reasons – are what sets Font­store apart from its competitors. This is what I would like to see more of. When you don’t have DIN or Sabon in your library, don’t follow in their footsteps, but try to design a DIN or Sabon of the 21st century. Satya Rajpurohit should be praised for encouraging and paying more than thirty type designers to give it a shot, and it is impressive that he was able to do so without a large corporation like Monotype or Adobe behind him.

Will I keep my Font­store subscription after the first month? I am not sure yet – but the next addition to the library may give me a nudge in the right direction. Release date: tomorrow. And even if I cancel now, I will be back in 2025. Font­store is “expecting to add about 3,000 new font families” by then. If they are as ambitious when it comes to quality as they are in terms of quantity, that will be a nice library.

1   In a previous version of this paragraph, I used the term ‘outright plagiarism’, stating that this does not seem to be the reason for the similarities between the typefaces I mentioned. It has been pointed out to me that this paragraph can be misread in a way that suggests that I do consider these typefaces to be cases of plagiarism. I do not – and I have therefore reworded this paragraph, avoiding the term ‘plagiarism’ and only mentioning what I see as the source of the similarities: a lack of creative ideas. ↑